What is COW? = Cycle on Wednesday
On Wednesday the 9th of March 2011, everyone in Galway is encouraged to cycle to work, school, college, or to get to wherever you need to go. That includes you!

Why take part?
Bike Week 2011 is coming to Galway this year, with the National Event being launched in the city in June. As part of a lead up series of events, the An Taisce & Green Schools Secondary School are encouraging a city-wide Cycle on Wednesday (COW day) (see their website). This simple idea is also being promoted, by individuals and organisations across the city. The more people who cycle, the safer our roads will be. So why not take part?

What’s happening on COW day?
Some lucky staff and students who cycle on COW day at NUI Galway on the 9th of March will be getting goodies from the Galway Cycling Campaign to acknowledge their contribution to a healthier and less congested Galway. A team of student volunteers via the Community Knowledge Engagement Initiative (CKI) on campus have offered their time to share these out, with passer-bys around the campus on this date.

If your school or workplace, or organisation, or even yourself as an individual is taking part in COW day on the 9th of March, let us know, and we’ll do our best to get a bike saddle cover, or bike accessory out to you too. Email us as soon as you can on: [email protected] 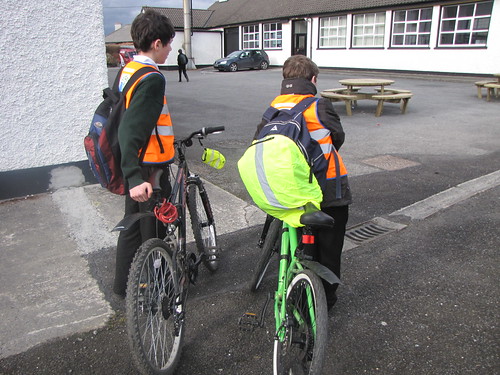 This is the new updated version of the seminal textbook on cycling skills. The latest edition of Cyclecraft has been extensively revised and extended. Now targeted at both adults and children, with special advice for parents and reflects on experience gained through implementation of Bikeability, the National Cycle Training Standard in the UK. It has been restructured to present a more effective teaching order, with more detailed advice on the basics of starting to cycle and an updated section for current bike styles and equipment and also new chapters on carrying children and goods and riding with others