Conduct of latest DTTaS consultation raises concerns for future of rural cycling policy and for cycling tourism in Ireland.

After the recent controversies in Galway about the behaviour of the DTTaS, TII (Formerly the NRA) and the two local councils in relation to cycling policy.  A new consulation process was announced by Ministers Shane Ross TD and Patrick O’Donovan TD at a meeting with Galway Cycling Solutions in Dublin in January 2017.  The consultation on the “Strategy for the Future Development of Greenways” emerged from the Department of Tourism, Transport and Sport (DTTaS) in late May.  Unfortunately it was found to be flawed and the content reinforces serious concerns regarding the treatment of cycling and cycling tourism within the DTTaS. The structure of the document suggests that the department is still seeking to avoid or evade a model of cycling provision that is well-established and highly successful across Europe; using minor roads and tracks limited to local motor traffic. Galway is the premier model for this form of cycling provision in Ireland and this form of cycling tourism has been a central part of the tourism offering in Galway for decades. The use of minor roads is also a key component of Objective 3 on rural cycling in the National Cycle Policy Framework (NCPF). The greenway strategy asks if the use of low-traffic roads is something that should “also” be considered but does not mention this aspect of the NCPF.  This strengthens concerns that under the current Government there is an active effort to set aside the NCPF.  The Galway Cycling Campaign submission argues for a return to the well understood principles of the NCPF.

What Ireland needs is a strategy for recreational cycling and cycling tourism in rural areas. What the DTTaS consultation announced was a “Strategy for the Future Development of Greenways”. Without further reading this title alone suggests that the DTTaS has again missed the point about cycling policy. Greenways or roads dedicated to cycling and walking (termed cycleways in Irish legislation) are an important component of a cycling strategy. However just as you cannot have a functioning roads network that consists only of motorways. Likewise you cannot have a functioning cycle network that consists only of greenways. The implication, and underlying assumption, of the proposed Greenway Development Strategy is that for many cycling will remain an activity that is accessed by car. Greenways or “Cycleways” cannot deliver full benefits for Ireland unless they are used as one component in a comprehensive network of routes linking destinations. Greenways are only one form of cycling provision. Other components in a cycling network will include roads shared with motor traffic, roads with some form of segregation such as roadside cycle tracks, minor country lanes and so on. In our submission we argue that the concept of a Greenway Development Strategy is fundamentally flawed and misconceived and so should be set aside. What is needed is a national strategy and program for the delivery of Objective 3 of the National Cycle Policy Framework (NCPF).

For rural recreational cycling and cycling tourism the underlying policy context is Objective 3 of the National Cycle Policy Framework (NCPF): Signed rural cycle networks for tourism and recreation. This section of the NCPF was aligned with the previous 2007 Fáilte Ireland Strategy for the Development of Irish Cycle Tourism. The vision of both documents was for a National Cycle Network based mainly around low traffic rural roads and some greenways. Greenways were to obtained using obvious features such as canal towpaths, disused railways and so on. Segregated roadside cycle facilities would also be needed close to towns to keep cyclists away from heavy traffic that could not be avoided on busy corridors. However away from towns these corridors would be avoided. Failte Ireland document states explicitly that busy R and N roads are to be avoided “Generally due to high traffic levels and high speeds we wish to avoid cycling on N or R-roads”. This is a model that has worked successfully for decades in Galway and elsewhere.

Galway is Ireland’s best example of a highly succesful cycling tourism experience based on unsegregated cycling on minor rural roads. Every year thousands of visitors come to Galway, hire bikes, and use them to explore a local area. Some of the visitors are clearly people who may not have cycled since childhood. Even so they manage to hire bikes and cycle on local roads shared with local motorists and farm traffic. It is a model that has run successfully for decades and many of our happy visitors put up videos on you tube.

This all happens on the Aran islands. Physically, there is nothing special about these roads compared with many other country lanes in Galway. What makes this cycling possible on the Aran Islands, is that the motor traffic is only local residents and farmers. The only thing stopping a similar experience elsewhere in Galway is a refusal by state actors to accept that it is possible to manage local roads for the benefit of the local community. Instead there is a destructive attitude that “all roads are there for any driver who wants to use them”. In Germany, the Netherlands and other places there is a different attitude. Local authorities will identify local routes that are not suitable for through-traffic and exclude it. For motor vehicles these roads are then made “local access only“, “residents only” or “agricultural traffic only”. Lower speed limits are also applied. These routes then provide an “Aran islands” like resource for cycling and walking and such routes are the backbone of recreational cycling in many areas.

This youtube shows a speeded up view of a section of the Fulda cycle route in Germany.

There are a range of route types involved in this video but many of what look like “traffic-free” sections running through fields are actually still open to motor vehicles accessing local properties. These can be seen from time to time parked at the roadside. 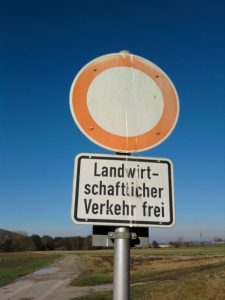 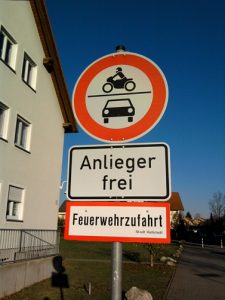 In Germany this sign creates roads open only to local farmers, local residents (anlieger) people on bikes and people on foot.  The result is a large network of low-traffic walking and cycling routes and improved quality of life for local residents.

Regulations for general control of traffic and pedestrians.

35.—(1) The Minister may make regulations for the general regulation and control of traffic (including the parking of vehicles) and pedestrians in public places.

(2) Regulations under this section may, in particular and without prejudice to the generality of subsection (1), provide for all or any of the following matters:

Part II Classification of Roads and Assignment of Functions

(1) (a) The Minister may by order classify any existing public road or any proposed public road as a national road.

(b) The Minister may by order classify any existing public road or any proposed public road as a regional road.

(c) A public road, other than a national road or a regional road, shall be a local road.

(ii) divide a particular class of roads into subclasses.

(i) specified types of traffic,

but shall not prohibit or restrict such use—

(I) by ambulances or fire brigade vehicles,

(II) by vehicles used by members of the Garda Síochána or the Defence Forces in the performance of their duties as such members,

(III) for the purpose of maintaining such protected road.

(b) A person who contravenes a prohibition or restriction under paragraph (a) shall be guilty of an offence.

Closing of particular roads to vehicles.

(a) it shall be the duty of the road authority charged with the maintenance of the road to which the order relates to erect and maintain, at such places as are specified in the order, notices in a form approved of by the Minister stating the effect of the order, and

(b) it shall be lawful for such road authority, with the consent of the Commissioner, and shall be their duty if required by the Commissioner, to erect and maintain a sign, either in advance of or at the road, to give indication to traffic of the prohibition provided for by the order, being a sign conforming with the prescribed provisions as to size, shape, colour and character.