Background: the Greenway controversy and the new strategy

The recent conduct of various “Greenway” projects by the Department of Transport, Tourism and Sport has been extremely controversial and has generated unneeded conflict. In Galway, the main source of the difficulty has been a switch by state actors to treating greenway provision as exclusively involving the construction of new roads, mainly through working farms. This is either new roads along disturbed ground such as the long abandoned and now privately owned Clifden railway alignments. Alternatively, in East Galway the proposed new roads are to be constructed along new alignments through open farmland. Previously there had been an acceptance that in accordance with national policy, minor country lanes could also form part of greenway networks. Predictably this “build new roads” approach has generated serious conflict and acrimony. Out of this acrimony “Galway Cycling Solutions” was formed as a coalition of cycling and landowner interests. In January 2017 a delegation from Galway Cycling Solutions and farm organisations met Minister Shane Ross and Junior Minister Patrick O’Donovan to raise concerns. The delegation was informed a new process was to be developed. A consultation on a new Greenway Strategy was announced in May 2017 and received detailed submissions from interested parties around the country including the Galway Cycling Campaign. In July 2018 the Government published the resulting Greenway strategy document. In September 2018, this was followed with a €53 million funding call. If the Greenway Strategy had been circulated as a draft for discussion it would be a welcome step forward. As it stands the final document is flawed, seems to promise more conflict with landowners and the proposed strategy seems to be inherently unlawful under EU and national law.

The strategy document does make an attempt to appear reasonable and to take into account various issues that were raised during the strategy consultation. 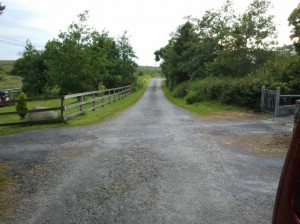 Picture: Section of the old Clifden road near Derryneen,  In 2012 the county council accepted that this could be used as part of the western section of the Clifden Greenway. Then something seems to have changed and minor country lanes became unacceptable to the council for subsequent greenway proposals.

A central problem remains an apparent focus on the construction of new roads. In the published strategy the authors use the words like “built” or “construct” where a credible and environmentally defensible strategy document would use words like “designate”, “adapt”, “create”, “provide” or “develop”.

Page 6: Objectives First paragraph: “The objective of this Strategy is to assist in the strategic development of nationally and regionally significant Greenways in appropriate locations constructed to an appropriate standard in …”
Page 7: What is a Greenway? third paragraph: “Greenways funded under this Strategy will be built following …”
Page 13: Public Consultation Process, third paragraph: “… the plan to construct a Greenway will intensify the use of that land and … “
Page 13: Land Access for Greenways: “… there are significant amounts of land in State ownership around the country that are suitable for the construction of Greenways or sections of Greenways …“
Page 14: Permissive Access, second paragraph: “… with the sponsoring agency or local authority that has paid for the development and construction.”
Page 14 Land purchase: “… it is anticipated that voluntary agreements would be entered into to sell the small sections of land required to construct the Greenway…”
Page 14 Accommodation Works: “It is recognised that a proposal to construct a Greenway route through or adjacent to private land …”
Page 16 Impact on Agriculture and Rural Areas; fifth paragraph: “While there are risks associated with any construction near farm-holdings, the development of a Greenway …”
Page 18 Greenways and the Environment: “Greenways must be planned and constructed in compliance with the requirements of Irish and European law including, but not limited to, EU Directive 2014/52/EU.”
Page 20 Page title “Post construction”
Page 23 Other Cycling and Outdoor Recreation Infrastructure: First paragraph: “Whilst this Strategy concerns the construction of strategic Greenways there …”

The authors do acknowledge the Eurovelo guidelines and the use of low traffic roads. However, the authors appear to frame this as something that is mainly suitable for experienced cyclists which suggests the authors have an incorrect understanding of cycling policy and cycle route provision. As our submission pointed out, there are numerous locations across Europe where low-traffic roads provide a family friendly and child friendly cycling environment serving inexperienced cyclists. Furthermore the use of low-traffic roads is a key component in Objective 3 “Provide designated rural signed cycle networks” of the 2009 National Cycle Policy Framework. The Greenway Strategy does not seem to mention the National Cycle Policy Framework at all – which many might find very curious omission. Instead the published strategy seems to frame low traffic roads only as a way of linking the new roads constructed as “greenways” to other destinations or as an alternative network for “experienced” cyclists. The discussion of low traffic roads is passive and mentions traffic calming and speed limits but not the active creation of low-traffic environments. (The traffic calming methods mentioned “road narrowing, chicanes” are often hostile to cyclists and therefore do not inspire confidence in the understanding of the strategy authors). In relation to the new roads that are to be built under the strategy, the authors acknowledge that limited access for motorised vehicles will need to be maintained for landowners and maintenance vehicles. However, this seems to be only by way of responding to farmers concerns. The opposite to this, that restricting motor vehicle access to existing roads is a standard way to create a greenway experience, is not discussed. Like the discredited National Cycle Network Scoping study the latest Greenway Strategy document reads like something that was put together by roads engineers for the purpose of justifying particular types of roads works. It seems that the main goal is to spend significant funds on building new rural roads rather than being focused on delivering our national cycling infrastructure in the fastest, most sustainable and most resource efficient manner. At the July launch of the strategy, and in a subsequent funding call the Minister for Transport, Tourism and Sport, Shane Ross and Minister of State for Tourism and Sport Brendan Griffin stated that the strategy is backed by a fund of €53m for the years 2019 to 2021

On page 18 the strategy authors specifically reference EU Directive 2014/52/EU. Directive 2014/52/EU is the latest version of directive 2011/92/EU “on the assessment of the effects of certain public and private projects on the environment”. The objective of the directives is not merely to ensure projects are carried out in a manner that protects the environment. But to ensure that “Effects on the environment should be taken into account at the earliest possible stage in all the technical planning and decision-making processes”. Any project may have an environmental impact purely through the manner in which it consumes resources. There is also an associated EU communication “COM(2011) 571 final Roadmap to a Resource Efficient Europe” which commits to the efficient use of resources and to the principles of sustainable development. (See below for relevant sections). These directives are transposed into Irish law under regulations such as the European Union (Planning and Development)(Environmental Impact Assessment) Regulations 2018 (S.I. No. 296 of 2018).

As adopted into Irish practice and Irish planning law, there is a requirement for a developer to commission an Environmental Impact Assessment Report (EIAR) as part of the planning process. This report must include an assessment of reasonable alternatives that achieve the goal of the project. The environmental impacts of these alternatives must be compared. The intent is that a project with the least impact and most sustainable use of resources can be found. An EIAR is a key part of the planning process for projects such as new roads. When the National Planning Board “An Bord Pleanála” holds a hearing on a project is perhaps better thought of as being a hearing into the EIAR report rather than simply the project in isolation.

Conclusion: the 2018 Greenway Strategy is contrary to EU and national law.

The published Greenway Strategy does not reflect key areas raised during the consultation process. The latest Greenway Strategy document is focused on constructing new build roads as “greenways”. It acknowledges that motor vehicle access might be permitted to these greenways but not the opposite; that restricting motor vehicle access is an effective, established, way of creating a greenway-like experience on existing local roads. For local roads the strategy merely refers to traffic calming rather than roads management or traffic restriction and diversion. The document acknowledges that low traffic local roads have a role in cycling networks but frames this merely providing links to the greenways (new rural roads) constructed under this strategy.

Therefore the apparent effect of the Greenway Strategy is to direct local authorities to propose schemes that involve building new roads through lands as a direct alternative to adapting existing features that already have an established value as cycling infrastructure. In effect this seems to be an instruction to propose projects that have higher environmental and resource impacts as an alternative to those that have lower impacts.

The 2018 Guidelines for Planning Authorities and An Bord Pleanála on carrying out Environmental Impact Assessment state as follows:

(7) Over the last decade, environmental issues, such as resource efficiency and sustainability, biodiversity protection, climate change, and risks of accidents and disasters, have become more important in policy making. They should therefore also constitute important elements in assessment and decision-making processes.

(8) In its Communication of 20 September 2011 entitled ‘Roadmap to a Resource Efficient Europe’, the Commission committed itself to including broader resource efficiency and sustainability considerations in the context of the revision of Directive 2011/92/EU.

Milestone: By 2020 overall efficiency in the transport sector will deliver greater value with optimal use of resources like raw materials, energy, and land, and reduced impacts on climate change, air pollution, noise, health, accidents, biodiversity and ecosystem degradation.