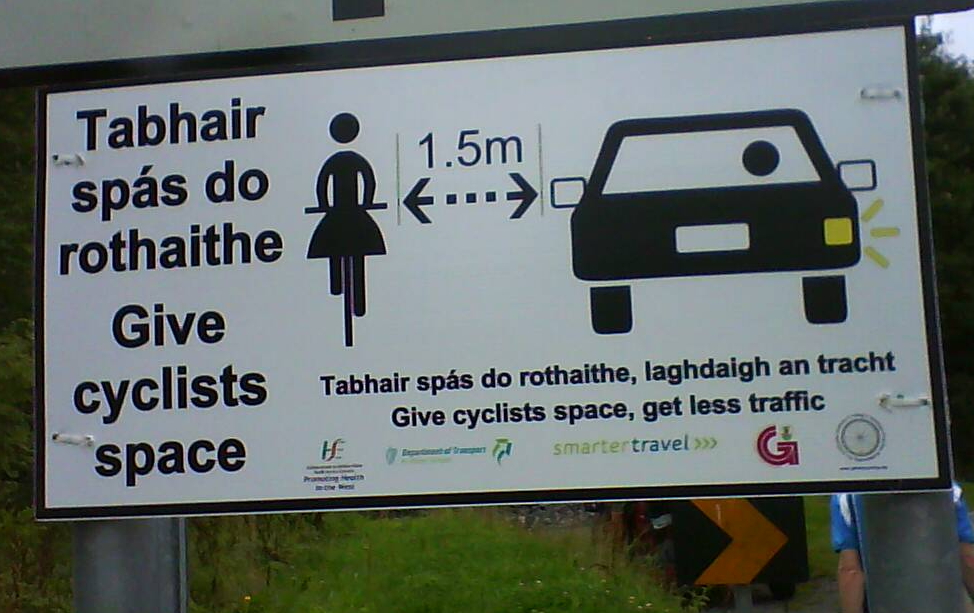 Bikeweek 2009: One of the Cycling Campaign passing distance signs

The Galway Cycling Campaign is circulating a Briefing Note on Minimum Passing Distance Proposals. Minimum Passing Distance Laws (MPDL) are well established in other countries. They are important component of the more cycling-friendly experience people have when visiting places like France or Germany. Since 2008 it has been Galway Cycling Campaign policy to seek minimum passing legislation similar to that found in various other countries.  The Oireachtas Committee on Transport Tourism and Sport is due to consider the issue on Wednesday February 7th

Video from France (Grenoble) on how to pass Cyclists

German Driving school video on how to overtake cyclists =

Video of overtaking behaviour in Berlin

There are two MPDL proposals relating to cycling before the Oireachtas at the moment. The bills follow a template established in other countries that specifies 1m as a minimum passing distance where the speed limit is 50km/h or lower and a passing distance of 1.5m where higher speed limits apply.

Unfortunately, the proposals have been met with much ill-informed speculation. Spurious concerns have been raised with regards to difficulties with enforcement. One answer to this is that traffic laws do not have to be “enforceable” to have an important effect.  We discuss the general obligation regarding speed (Article 7) which stipulates that drivers should not drive faster than their ablity to stop within the visible space in front of them.  Some contributors have tried to frame the discussion in terms of special clothing such as polystyrene foam cycling helmets and high-visibility clothing. This is seen as an attempt to dilute the obligation regarding speed and as an attempt to excuse dangerous driving.  The other issue with enforcement is that it is entirely possible and police forces around the world are doing it.  Questions have also arisen with regards to how this law might work with regard to existing traffic legislation and particular Irish road features. We explore the position of stakeholders such as the Department of Transport Tourism and Sport by examining the recent controversy over slow zone signage. In other countries people who walk are also protected by minimum passing distance laws. We explore this and also the failure of the Irish state to provide formal duties of care towards vulnerable road users by drivers. We compare and contrast the treatment of child safety by Irish state actors with the treatment of the issue elsewhere. In Ireland state actors seem focused on making small children responsible for risks created by adults.  Elsewhere adults are expected to modify their behaviour in the presence of children.  The difficulties thrown up by the intervention of Robert Troy TD are explored. It is hard to square Mr. Troy’s intervention with some of his previous statements that are hostile to cycling.  In particular Mr. Troy has called for normal cycling in ordinary clothes to be criminalised.  Finally we deal with the issue of Australia. Some contributors have tried to cite Australia as an example to follow. This is clearly not acceptable in the light of cycling-hostile policies found in Australia – particularly their cycle-helmet laws. Australia’s cycle helmet laws are viewed as a public health disaster and, based on Australia’s experience, helmet laws are strenuously opposed by cyclists in Europe and elsewhere.

Overall the MPDL proposals are welcome.  However, there is real cause for concern that there might be an attempt to attach the MPDL proposals to a push to criminalise normal walking and cycling by requiring unusual items of clothing such as polystyrene foam cycling helmets or so-called high-visibility clothing.  If any attempt like this is made then it should be resisted forcefully.