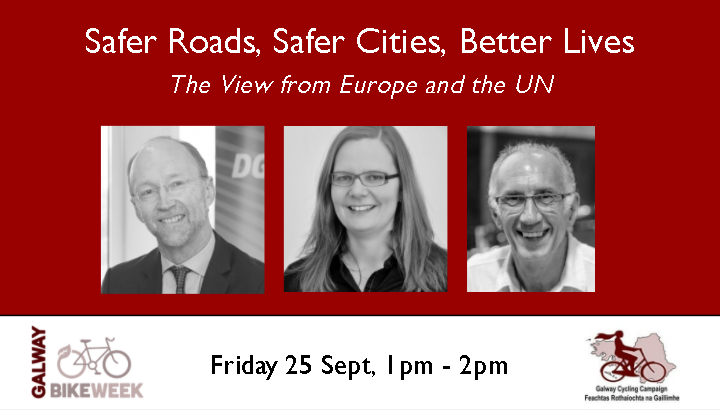 Galway needs to follow the example of Wales and decrease its speed limits for urban areas from 50km/h to 30km/h. All welcome to our online public meeting with Gwenda Owen of Cycling UK- Wales.

Galway city council is currently in the process of a public consultation about revising speed limit bye-laws throughout the city and Kevin Jennings, chairperson of Galway Cycling Campaign, believes that Galway should be inspired by the Welsh Government’s report that is recommending 30km/h replace 50km/h as the default speed limit on urban roads throughout the country and should embrace the benefits of slower speeds.

If the legislation is passed, Wales will become the first country in the world to reduce the default speed limit for urban areas to 20mph.

He said: “If someone is struck by a vehicle at 30km/h, their chance of survival is up to 97 per cent. This decreases with every kilometre driven faster.

“A lower citywide speed limit would be life-changing because slower speeds will improve the places where we live, work, and go to school. We saw during lockdown that people were encouraged to walk and cycle more because they felt safer doing so.

“We look forward to working with Galway City Council to support lower speeds limits. We are happy to see public support for citywide lower speed limits from An Garda Chief Superintendent Tom Curley and chair of the Joint Policing Committee, Cllr Níall McNelis.”

On Friday 7 August, between 7.30pm and 9.30pm, the advocacy group will host its monthly meeting online via Zoom with Gwenda Owen of Cycling UK – Wales the special guest speaker.

Owens has played a significant role creating public support for the benefits of slower speeds in cities, towns, and villages by working closely with grassroots and community organisations and sat on the Welsh Government’s Walking and Cycling Action Plan Steering Group, which produced the Walking and Cycling Strategy for Wales in 2014.

Spokesperson for Galway Cycling Campaign Martina Callanan said; “The majority of our primary and secondary schools, primary care centres, community centres, and sports grounds are in our suburbs, outside the inner city zone, as well as Galway University Hospital, Bon Secours and Merlin Park hospital campuses, and GMIT.

“These are places that many people arrive at by foot and bike. Lower speed limits will make it safer, healthier, and much more pleasant, to choose active travel.”

Read the story on Galway Advertiser

Chief Superintendent Tom Curley gave his support to reduce Galway city speed limit to 30 km/h to make streets safer for everyone at the Joint Policing Committee today, Monday. He was responding to a question from Cllr Níall McNelis, chair of the Joint Policing Committee, who asked for garda support to make Galway’s streets safer for families and older people walking and people cycling. The Chief Superintendent said that a 30 km/h speed limit was already being discussed to improve safety for cycling and is supported by Inspector Peter Conlon and Superintendent Damien Flanagan.

Galway Cycling Campaign warmly welcomes support from the Garda and the Chair of Joint Policing Committee, Níall McNelis, for a 30 km/h speed limit for safer cycling and safer streets for people of all ages and abilities.

This comes after a public meeting last week about the benefits of lower speed limits hosted by Galway Cycling Campaign, which was addressed by Prof Kevin Leyden of NUI Galway, Maria Delaney of Noteworthy, and Mairéad Forsythe of Love 30. Rod King, founder and campaign director of 20’s Plenty for Us, attended the online meeting and said that he will address the annual Road Safety Authority conference in the autumn.

Spokesperson Martina Callanan said lower city speed limits are becoming more common in European cities such as Athens, Milan and Brussels and thanked the Garda for their support.

Slower speeds will give parents peace of mind to bring small children into the city centre to shop and dine, when children play and cycle outside their homes, and as children and teenagers walk and cycle to school. We want to thank An Garda for their support for lower speeds to make Galway a safer and nice place to live, shop, and play.

Mairéad Forsythe of Love 30, Ireland’s campaign for lower speed limits, was in attendance at today’s meeting. She commented on the Chief Superintendent’s remarks.

Introducing a 30 km/h speed limit would be a significant achievement for road safety in Galway. It will make our roads safer for people walking, cycling and driving. Most important of all, slower streets make our neighbourhoods more pleasant places to live, work and for children to play.

The typical road speed limit of 50 km/h does not feel fast if you are behind a windscreen. The research is stark: speed is the biggest contributing factor to road deaths in Ireland. If a person walking is hit by a person driving a car at 50 km/h, there is a 50% chance that person will die. At 60 km/h – that’s only 10 km faster – 9 in 10 pedestrians will die.

Love 30 to Change Our Streets

World Bicycle Day saw cross-party support for 30 km/h speed limits for Dublin’s city centre and suburbs. We expect Galway to follow suit. Join us for a special guest speaker event this Wednesday, 17 June 2020, from 8 pm to 9 pm about how lower speed limits will make a happier and healthier Galway with investigative journalist Maria Delaney from Newsworthy, Mairéad Forsythe of Love 30 – Ireland’s campaign for lower speed limits, and Prof Kevin Leyden of NUI Galway. Event open to all.

This one change to our streets will have an immediate impact on improving road safety. It will also make cycling and walking easier and more pleasant for people of all ages and abilities.

More Space and Less Speed are the two principles of our Change Our Streets campaign.

We are delighted to invite you to a special guest speaker event this Wednesday event at 8 pm on Zoom.

The Problem – cycling injuries and fatalities

The Benefits – happier, healthier and safer streets within people-centered communities

Kevin Leyden, Professor of Political Science, Co-Director of the Creative, Liveable and Sustainable Communities Cluster of the Whitaker Institute

Less Speed is the second principle of #ChangeOurStreets campaign. We need our Council and Government to lower speed limits and redesign roads to enable adherence to lower speeds.

Our public events are free events and open to all. If you’d like to get involved, please join us and our everyday cycling community. Our membership contribution is €10 or €5. If you would like to donate more, you’d be most welcome!