In August Kerry County council made an application to An Bord Pleanála for the so called South Kerry Greenway running roughly parallel to the N70 national route for 30km between Glenbeigh and Cahersiveen/Reenard on the Iveragh peninsula.  To achieve their proposed design, the county council propose to acquire by compulsory purchase order (CPO) sections of the abandoned Valentia railway.  This railway was abandoned in 1960, the rail lines lifted within two years, and much of the land sold or transferred back to the farmers along the route.  The misguided and unhelpful conduct of some recent “greenway” projects by local authorities has been hugely damaging to the brand of cycling and created needless acrimony between farming and cycling interests. The South Kerry scheme could set a positive or negative national precedent.  If conducted incorrectly, it could set the national farming community in opposition to greenway projects for a generation. The Galway Cycling Campaign wishes to avoid this outcome and has made a submission to An Bord Pleanála.

A central problem identified with the Kerry County Council planning application is an apparent failure to comply with EU directives on environmental impact assessment. The 2018 Guidelines for Planning Authorities and An Bord Pleanála on carrying out Environmental Impact Assessment state as follows:

The published EIAR does not appear to include commonly accepted alternatives recommended by the applicable policy frameworks. The EIAR consultants make no apparent mention of using minor country lanes or boreens. This option if available could involve little engineering and would be less environmentally damaging than any of the proposed works in the EIAR.

The guiding policy source in this instance is the 2009 National Cycle Policy Framework (NCPF).  Under Ministerial Circular PSSP 8 – 2010 the NCPF is a national policy under the terms of section 9(6) of the Planning and Development act regarding development plans.  Objective 3 of the NCPF provides for a national cycle network that may include greenways and disused railway corridors but also makes extensive use of minor roads.    The NCPF references the 2007 Fáilte Ireland Cycling Strategy, which proposed an Irish Cycle Network using “the network of country lanes and roads throughout the country. These roads have been chosen where traffic levels are light and lanes have a line of green grass up the centre“.

We find no discussion of this option – even to dismiss it – in the EIAR.

Other countries make extensive use of minor country lanes to provide long distance cycling routes.  The South Kerry Greenway is supposed to be a component in EuroVelo 1 the Atlantic Coast Route.  We have discussed the Eurovelo guidelines previously in relation to the problematic Dublin Galway Greenway proposals. Tourist cycling routes should be kept well away from heavy traffic but they do not need to be completely traffic-free. Across Europe cycling tourists and family groups make extensive use of low-traffic roads as part of local and national cycle networks.

This model is not simply a matter of passively finding roads that match the criteria. Local authorities will actively manage minor rural roads to reduce and divert inappropriate motor traffic and provide for walking and cycling.  There is no legal impediment to doing the same thing in Kerry.

The ordnance survey map shows a range of minor roads on the Iveragh Peninsula that might form part of the proposed route.  Possible options can also be found using Google Streetview.    CPO is an intervention that is not be treated lightly and the requirements of natural justice must be seen to be followed.  If the use of obvious alternatives is not dealt with in the current EIAR then it will have to be dealt with at any oral hearing.  Any such discussion at an oral hearing may be incomplete and will happen without formal prior consultation with affected parties along the alternative routes.  This reinforces the need to reject the current application and require a new EIAR that reflects the relevant EU and state policies. 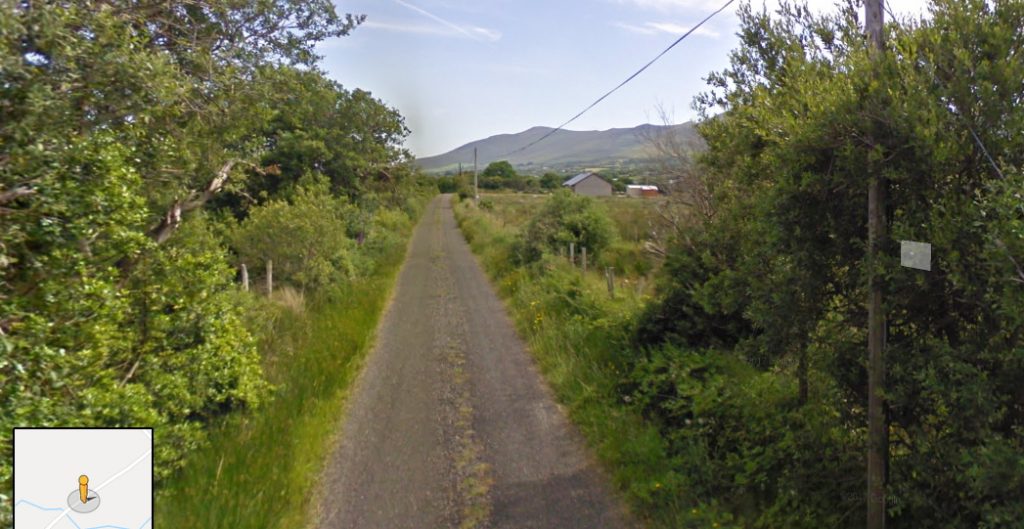