Seamus Quirke Road: Loan was a chance to force a needed redesign

The Galway Cycling Campaign has expressed disappointment at the news that the elected city council have given permission city officials to take out a larger loan to allow the Seamus Quirke Road works to continue. The Cycling Campaign have previously expressed serious concerns about the current design for the Seamus Quirke road and view it as unworkable from the perspective of cycling as a form of transport and a highly questionable use of public money. According to the cyclists, when the road is finished, many cyclists will find it safer and more convenient to stay in the bus lanes and ignore the cycle facilities being built on the road. They also say that the design will encourage other cyclists to use the footpaths and to cycle on the wrong side of the road. 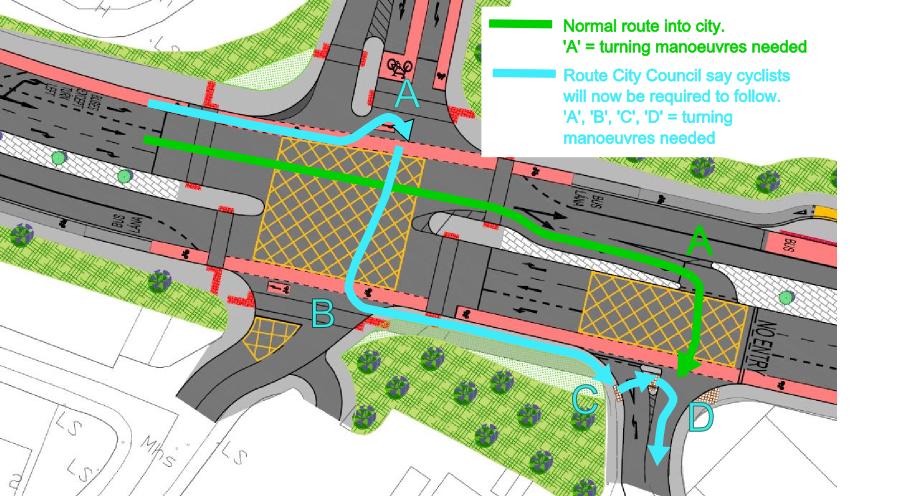 “We cannot see this being anything other than a mess when it is finished” said Campaign PRO Oisin O’Nidh. The cyclists say the city council should have used the loan request to impose design changes on the officials responsible. “Taking out the sections of raised cycle path and providing on-road cycle lanes the length of the road would solve many of the problems” stated Mr. O’Nidh. The cyclists say in all probability to would been cheaper and certainly easier to construct without the cycle paths. The cyclists have described some aspects of the design as “bizarre” such as the requirement that cyclists accessing Shantalla Rod must hop-up on the footpaths as part of the manoeuvre.

The Seamus Quirke Rd redesign has been controversial since it was announced in 2002. At that time the city council engineer responsible, Mr. Joe Tansey stated that cyclists would be required to “dismount and become pedestrians” at every junction. This design aspect was thrown out by An Bord Pleanala following an oral hearing into the scheme.

Comment: This shows the route the designers of the current scheme expect cyclists to take to access the Rahoon road/Shantalla Rd if coming from Knocknacarra – a normal right turn has been broken into four separate manoeuvres and potential points of delay – this includes a section where cyclists are supposed to take to a footpath to get around the corner.

The Cycle Campaigns Analysis is that many cyclists will just cross the road further up and cycle on the footpaths the wrong way. More confident cyclists will ignore the cycle paths and stay in the bus lanes since that provides a better “line” into the junction.