The Cycle Campaign originally welcomed the news that a public bike scheme was coming to Galway – the expected implementation of the Jacobs report promised to be a step change for cycling in Galway with one-way streets finally reverting to two-way use for cyclists.  Instead The Coke-zero bike scheme has not brought a universally happy time for cycling.  In a move that seemed calculated to cause offence, and succeeded in that apparent aim, already scarce bike parking was removed to make way for public bike stations. Bike stations that were to replace car parking were dropped. One-way street restrictions continue to be applied to cyclists in a snub of the legal changes brought in by Galway TD (and Minister of State) Bobby Molloy in 1998. On Lough Atalia Road some time in early 2018, apparently in conjunction with the construction of badly needed new bikeshare station at the playground, road signs went up “banning” cycling on the seaside path.

Clearly unless legally permitted it is an offence to cycle on a footpath (or footway in the traffic regulations). However should it be illegal to cycle on this particular path at Lough Atalia? First off shared use paths (pedestrian/cyclist) along roads can be problematic and in our culture are seen as something to be avoided. At Lough Atalia the seaside path itself is quite wide and much of the pedestrian traffic seems to stay on the city side of the road thus reducing potential conflicts. Also with a coastal path like Lough Atalia most pedestrians are moving along the path on a linear track – there are few crossing movements – so a type of conflict that arises at other locations is rarely present. Many otherwise confident road cyclists were in the habit of switching to the path if going or coming to Renmore.  Lough Atalia Road itself is not a nice place to cycle – it is the main access route for the docks – but is possibly slightly better than some alternatives (Sean Mulvoy Rd beats it in the nastiness stakes for people trying to cycle to the east of the city) 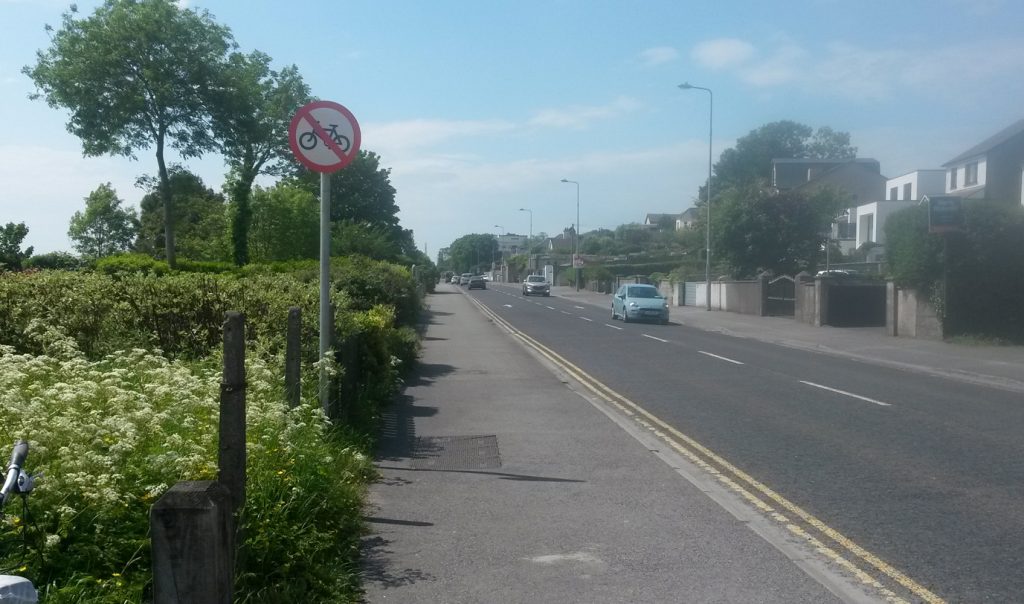 Figure: picture of one of the new signs on the Lough Atalia Path.  At this point the path is 2.9m wide

The use of roadside cycle paths or “cycle tracks” can also be problematic for people on bikes when it comes to junctions particularly if the junction treatments ignore the presence of cyclists and try to maintain convenience for motorists. Two-way cycle paths or paths that attract two-way use can be particularly problematic with the “wrong-way” cyclists at much higher risk of collision with turning motor vehicles. One exception to this rule however is if you are following a feature such as a river bank, canal tow path or a coastal route. These types of route have reduced junction conflicts and are ideal for two-way use. One successful example in Ireland is the Grand Canal cycle path in Dublin which has traffic lights for the cyclists where it meets roads crossing the canal. In Galway there are limited sections of coastal cycle path at South Park and behind the Golf Club between Black rock and Gentian Hill. One section of de-facto coastal cycle path was the seaside path at Lough Atalia which connects with paths leading to Lakeshore drive in Renmore and is a handy low-traffic route into the city from Renmore/Mervue and the GMIT (or vice versa).

Figure: The new bike share station.  There is a playground to the left.  Apparently bike share users and children are expected to cycle on the main road, which is also the main traffic access route to the Galway Docks.

What does design guidance say?

So what does design guidance say about using a path like this as a cycle route or a connection in a cycle route? The NTA publishes a cycle manual that has some problems but is an obvious reference (the NTA are part funding and overseeing the scheme). Working off their “width calculator” we can get a figure of 3m for a two-way road side cycle track. Transport Infrastructure Ireland also publish a manual for rural cycle ways. For low volume cycleways this has a desirable minimum width of 3.0m but provides “steps” down of 2m and 1.75. 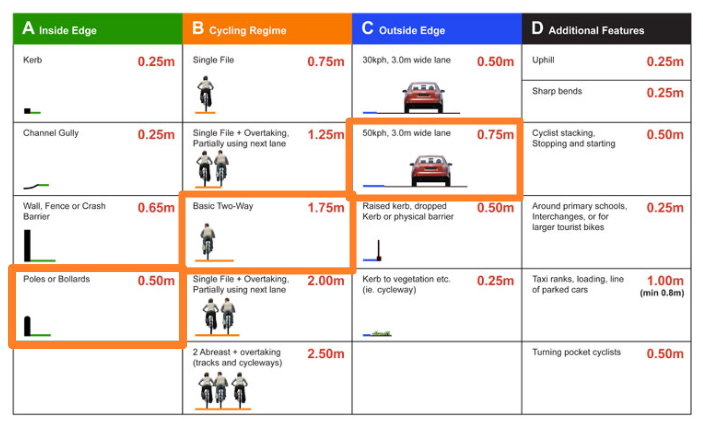 In the UK Local Transport Note 02/08 “Cycling Infrastructure design” has this to say for roadside shared use.

8.5.3 Where there is no segregation between pedestrians and cyclists, a route width of 3 metres should generally be regarded as the minimum acceptable, although in areas with few cyclists or pedestrians a narrower route might suffice.

In the Irish NTA cycle manual there is also diagram that shows 4m for two-way roadside cycle tracks – 2m in each direction so lets treat this as a target level of service.

How wide is the actual seaside path at Lough Atalia?

At the playground/bikeshare station where we find one of the “no cycling” signs, the path is 2.9m wide. For a long section it narrows to 2.7m and at one point there is a small parking bay where the effective width is 86cm (the width needed for a door into a wheelchair accessible toilet is 90cm). Down near the Galmont (ex-Radisson) hotel the path is 3m wide before the road splits into stacking lanes for the traffic lights at Fairgreen road. At the pedestrian crossing the width is 1.97m. 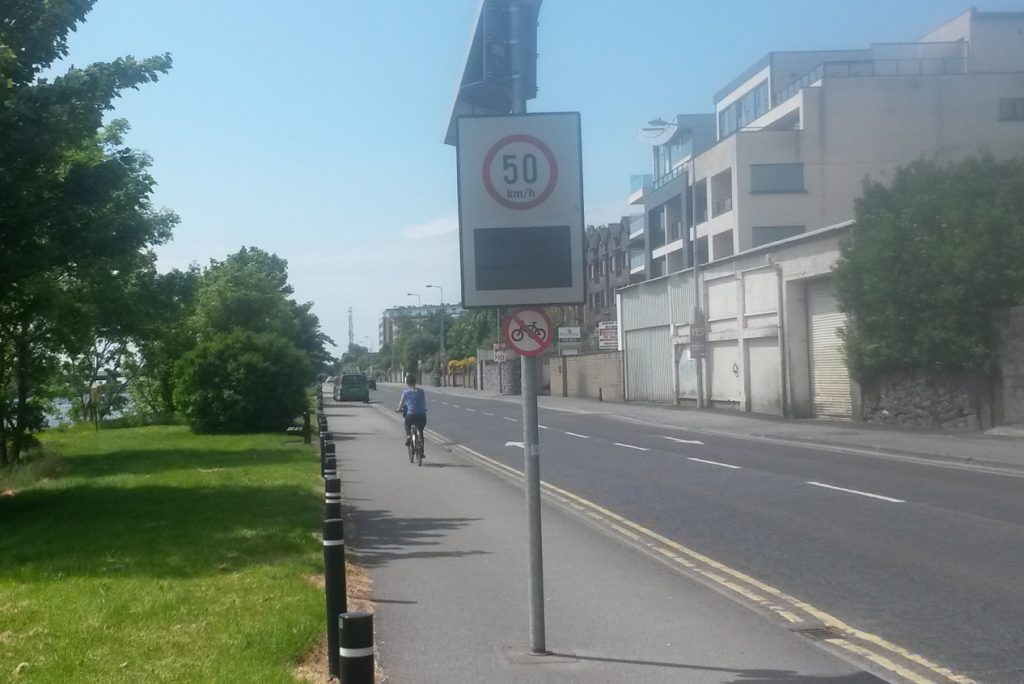 Figure: The Lough Atalia Path, at this point the path is 2.7m wide it varies from 3m to 2.9m with one pinch point at a parking bay. 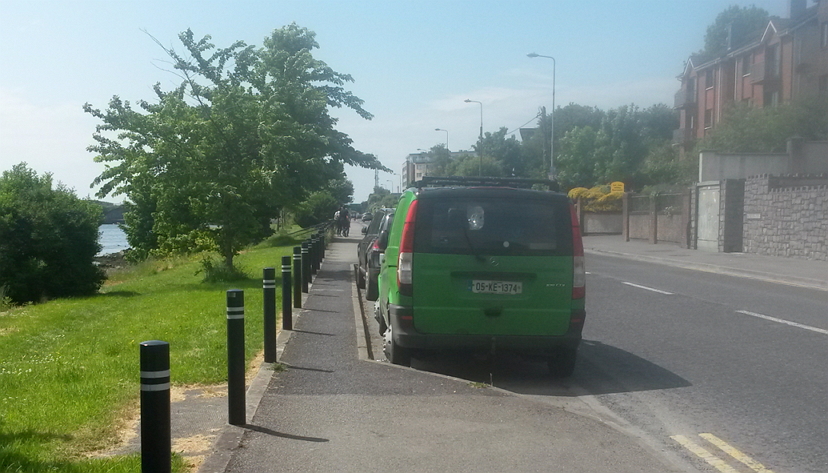 Figure: The parking bay pinch point – the path here is 86cm. The strategic value of this feature is open to question.

The City Development plan 2017-2023 already shows an indicative cycle corridor going around Lough Atalia.  Casual observers who perceive the Lough Atalia path to be already “ok” or “nearly ok” for two-way cycling/shared use could feel that they have support from official guidance. It is also clear that very little work would be needed to make the route conform to “best practice” with 2m lanes in each direction. Theoretically add a 1.3m concrete strip and the job would be done. There is clearly land available for this option.   (There would still need to be an assumption that faster “roadies” would use the road and any seaside path would not be convenient for people aiming to cycle to Moneenageisha and on to the Monivea road/Ballybrit.)

Despite this, in apparent defiance of available design guidance, and while putting in a bike share station, the City Council, Coca-Cola and the NTA between them decided to formally ban bike share users and other people on bikes from using a very obvious and established feature for accessing the city. As with other council activities associated with the Coke-zero scheme the reaction has been seething anger from many regular users of the route.

Doing something about it.

The Galway Cycling Campaign is forming a specific action group to look at the issue of a coastal cycling route from Oranmore to Barna. If this is an issue that affects you then why not become a member and get involved?