In January the city council announced a consultation on proposals to replace the  Headford Road (Kirwan) Roundabout with traffic lights. The consultation which closes on February 10th is not the first attempt to reach a consensus on the future design of this junction. We will follow up with a discussion of possible designs in another article.

The Kirwan Roundabout is probably most charitably described as “nasty”. It is high-speed roundabout of backward design inspired by previous British practice. These roundabouts are essentially a series of slip-roads chained closely together. As with slip-roads, this type of roundabout creates extremely hostile conditions for vulnerable road users such motorcyclists, cyclists and pedestrians. The construction of the Kirwan Roundabout created a shameful situation with elderly people living in Tirellan having to call taxis to get across the road to do their shopping in Dunnes. At the time that these roundabouts started appearing in Galway nearly 40% of households did not have a car. Roundabouts of this design were established to be dangerous places for two-wheelers back in the 1980s. 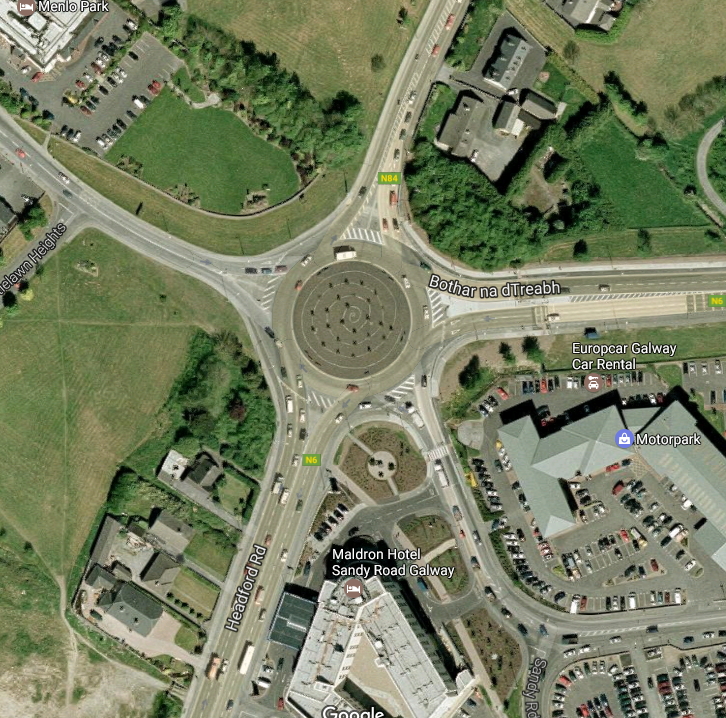 A 1987 report on the safety performance of roundabouts on the Swords bypass noted that the crash rate among two-wheelers was 5 times what might normally have been expected on that type of road. At that time serious reservation was expressed about the use of such roundabouts where high numbers of two-wheelers were expected. From the perspective of vulnerable road-users, that thirty years later roundabouts like this are still found a small, university-city does not reflect well on those who have managed Galway since 1987. Unfortunately experience of previous junction replacements has not inspired confidence in the ability of the council to make correct decisions. However hopefully lessons can be learned and applied here. Whatever the final configuration, following some essential principles should ensure an improved level of service and experience for cyclists and pedestrians.

Likely effect on cycling on the outer Headford Road corridor.
This scheme will only partially solve issues for cyclists on the Headford Road corridor. The presence of a series of hostile concrete traffic-islands and painted ghost-islands endangers cyclists and pedestrians and has sterilised the road as a place where people might feel welcome cycling. In effect, unprotected human beings are being used as a form of mobile “traffic-calming” within streams of moving motor vehicles.  The removal of this chain of traffic islands should be included along with the scheme at the junction. 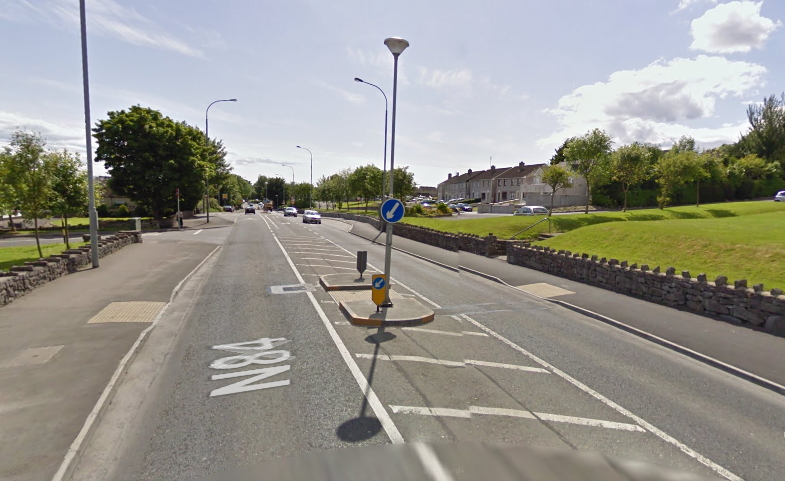 Observation on the consultation document.
Finally people reading the consultation document will find this controversial claim “Queueing and congestion during peak times This causes “rat-running” through residential and commercial areas”. This claim is unsupportable in our view. The main cause of the rat-running is that the city council has chosen to encourage rat-running. Examples include widening roads in Menlo and permitting through-traffic to use routes like the Liosban Estate and the Dyke road. Much of the rat-running could be eliminated be closing the Dyke road to through-traffic, closing Liosban to through-traffic and making it difficult to use Menlo as a though route. The requirement for measures to stop rat-running through local roads stands independently of any changes to the Headford Road Roundabout.