The Galway Cycling Campaign has made a submission on Budget 2016 calling for a national deposit scheme on glass bottles.

Moving motor vehicles have a “sweeping” effect that pushes broken glass, gravel and grit to the edge of the roadway. Cycle lanes and cycle tracks are parts of the road that no longer get “swept” by passing cars, so they automatically collect more of this unwelcome material. 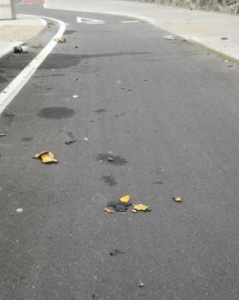 Roadside cycle paths in particular can be hard to reach for the usual Irish road-sweeping vehicles, and many are notorious for collecting broken glass. One UK study found that cycle track users are seven times more likely than road cyclists to get punctures.[i]

For a cyclist in a city like Galway, getting a puncture while you are approaching a roundabout can also be a serious safety issue.

The Netherlands, Germany and Denmark all have deposit schemes on glass bottles, but Ireland does not. It is our view that to support the Government’s Smarter Travel programmes, Ireland needs to introduce compulsory deposits on glass bottles.