An Bord Pleanala have rejected an application in Oranmore for a large (212 unit) housing development under the new strategic housing process.  The grounds given include that it will impact on an area of land that is recorded as a wintering site for White Fronted Geese.  In their refusal, the board cite impacts on the Inner Galway Bay, Creggana Marsh and Rahasane Turlough Special Protection Areas.  It should be noted that the current government’s controversial “mini motorway” model for the Dublin-Galway greenway will involve building a new road near the Rahasane Turlough.   However this is an aside.  Why is the Galway Cycling Campaign interested this housing development?   The reason is that it was viewed as an important test case for Government policy on sustainable transport.  Accordingly over the summer we made a submission to An Bord Pleanala seeking changes to the design to favour active travel and child safety.

The development “Arlum Oranmore” was to consist of 212 residential units, a crèche and an external play area.  However on review we found the development to be conceived and laid out in a manner that is hostile the needs of sustainable transport – particularly schoolchildren.  The layout of the development did not comply with the principles of the Design Manual for Urban Roads and Streets.  The provisions for cyclist and pedestrian access were the same as the provisions for motorised traffic. Providing for people on foot or on bicycles was essentially treated as an appendage to providing for motorised traffic. The plans also clearly intended to direct arterial interurban traffic into residential streets.

Observations on the Arlum site

The Arlum site is located on the eastern side of Oranmore near the former N18 National Route.  There are four schools within 2km of the site and all the schools are located on a similar alignment to the northwest.  Existing roads providing a potential route to the schools carry fast and heavy traffic and have hostile junction layouts. In particular, there is a pair wholly unsuitable junctions that involve slip roads to and from the Maree Road.  The site is on a clear desire line for a safe route to school not only for its own residents but also for children from adjacent developments at Oranhill to the south and Coill Clocha to the north. 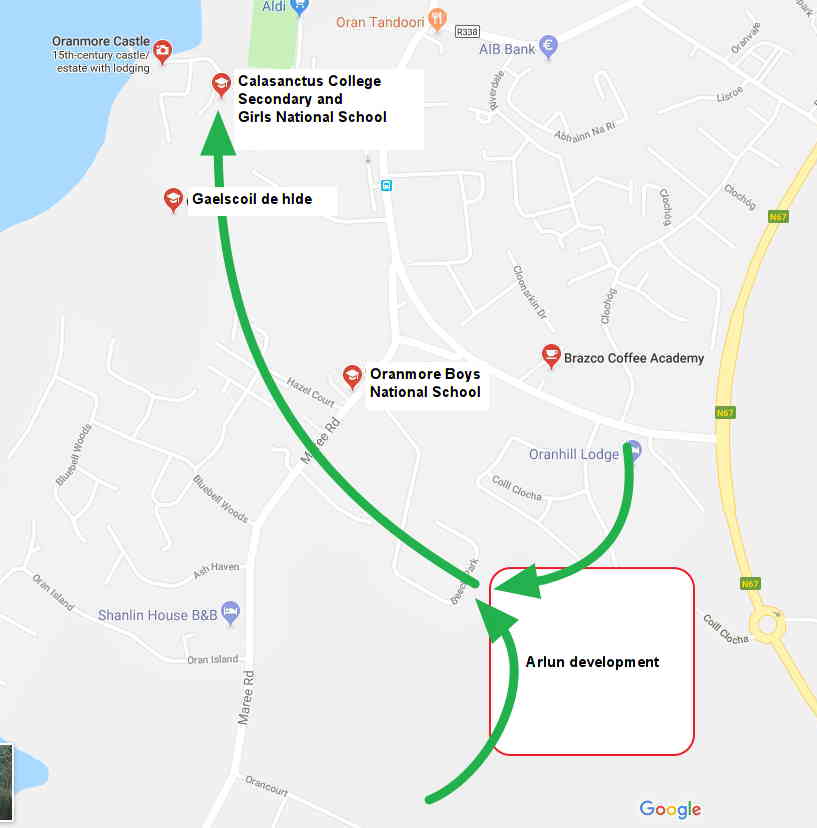 Figure: Google map extract labelled to show the site and the four schools located to the northeast.

Potential desire lines for safe school travel are shown by the green arrows. 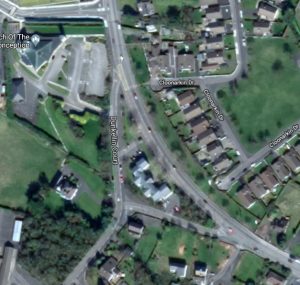 junctions within Oranmore village and on the proposed travel line for children.

In order to the comply with the principles of the Design Manual for Urban Roads and Streets we argued that the applicants should be required to provide safe attractive pedestrian and cyclist only links to adjacent developments.  If links were provided to Oranhill to the south and Coill Clocha then an additional link to Beech court would give children a route to school using mainly residential streets and roads.  Beech court was constructed using an unsustainable car-dependent cul-de-sac based layout and there was now an opportunity to remedy this mistake and provide a safe link for children. 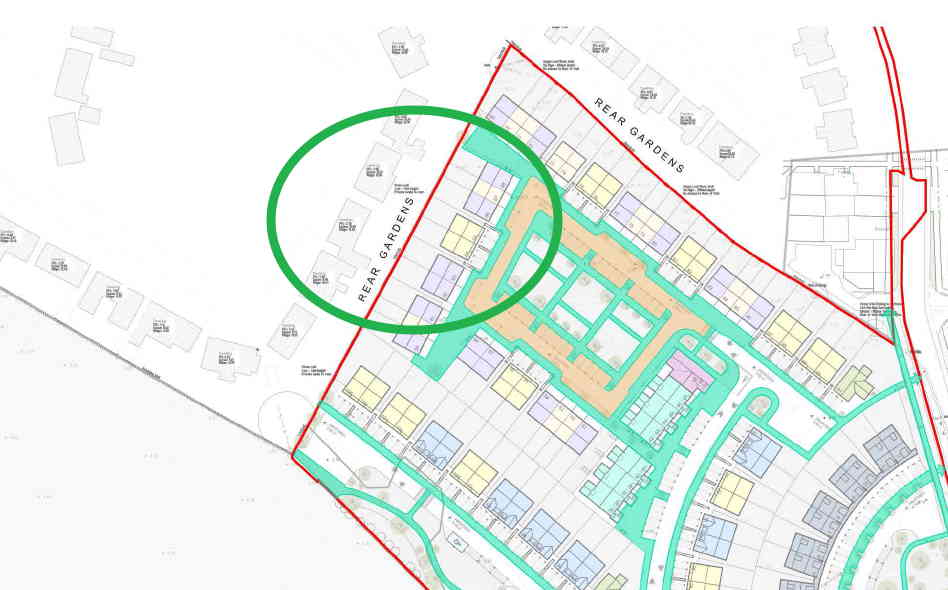 Figure: Planning file extract showing the northwest corner of the site where it backs onto Beech court.

There is scope here to provide a safe route to school by providing a link.

Our submission to the board argued that as a planning condition a gap should be constructed through to Beech court. The developer should be required to obtain and demolish existing dwellings in Beech court so as to provide a safe school route.  It might be possible for the developer to simply construct equivalent dwellings for the current Beech court occupants elsewhere in the Arlum development.   Section 3.3.3 of the Design Manual for Urban Roads and Streets refers specifically for a need to retrofit existing areas to create more sustainable neighbourhoods.  The proposed link to Beech court is an example of exactly the type of works needed and could have set an important precedent for other projects under the Strategic Housing Development process.

There was reference in the planning application to a north south distributor road.  It turned out that the intent was to re-purpose existing exclusively residential streets in Oranhill and Coill Clocha as some form of distributor road.  Indeed the Traffic and Transportation Statement by stated that the new roads arrangements were intended “to operate as a link road to serve traffic from the N67 National Route to the Maree Road”. The new road would start an existing but incomplete roundabout on the old Limerick road south of Oranmore and use residential streets to connect through to the Maree (coast) road.  In our view this was wholly unacceptable. If Galway County Council perceived a requirement for a relief road linking the N67/former N18 and the Maree road then they should set aside lands for that specific purpose. Due to car dependency imposed by poor planning practices, there is extensive peak hour traffic congestion on the outskirts of Galway.  This has resulted in a problem with rat-running at various peripheral locations that offer potential alternative routes into the city.   In this case creating this proposed distributor road would provide an obvious link for arterial traffic trying to use the coast road as a means of avoiding queuing at junctions on the main roads in or out of the city.  This type of traffic is incompatible with the “place function” of this area as a residential amenity.  In our submission we argued that the internal roads should be rearranged to prevent through traffic or that the link to the old N18 (N67) be dropped.  It should be noted that the planning files contained an assessment of the impact of traffic from the housing development on the main roads but contained no assessment of the impact for local residents of routing arterial traffic through their streets.

The planning Board’s decision to refuse on environmental impact grounds was probably a correct decision based on the information available.  It may also set an important precedent for other environmentally hostile developments such as the current Dublin-Galway greenway proposals. However we will have to find another place to fight the battle on safety and safe access for vulnerable roads users.